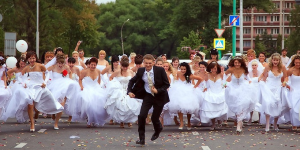 Psychologists say that a third part of the entire population of our planet is experiencing panic fear not that marriage, and even more or less strong ties. This applies to both women and men. Sexology puts them diagnosis – intimofobia.

But that same sex have more than enough in life, they may be afraid of it?
The point here is different. Under intimofobia understood the fear get emotional dependence on other people. Intimofobes long time did not feel the slightest need for creating a family, choose one-day numerous novels.

Diagnosis exists. And if there is a disease? Psychologists tend to another variant. Intimofobia soon as possible to describe as a kind of feature of human nature, coming from the depths of self-preservation instinct. Negativity is poured intimofobes due to the fact that society is such a position a little satisfied.

Any relationship of intimofobe lasts exactly as long as he does not feel that is tied to a person. Once that moment comes, the relationship will be broken, no matter how beautiful they are.
Of course, intimofobia can not be called a disease. However, its roots can be traced, and they come from childhood. Thus, among intimofobes very many of those who grew up without a father, or brought up in a family where the dominant position was his mother, and his father was, as it were disadvantaged. Strong and overbearing mother affects in the child’s mind, it forms the setting of excessive value their freedom.

I must say that intimofoby and friendship do not tolerate tight attachment. All their environment consists only of friends and acquaintances. But to find a close friend to them is almost impossible.
In some cases, a grown man with a well-established mentality suddenly finds himself in the camp of intimofobov. For example, it can happen in the case of adultery, and the care of his beloved woman. Fear to survive another such moment in life does not allow any representative of the fairer sex take its rightful place in his life. It turns out that all the vaunted Casanova – is not happy people and great lovers, but only a victim, with the victim’s own subconscious same!
In life intimofobes are very sociable, interesting people. Usually, because of the numerous novels quickly moving up the career ladder. Addicted to emotions that they give romance novels, they can not stop.

In summary, we note that only seem intimofobes successful free people. Most of them are aware of their loneliness. Sooner or later they begin to regret the lost opportunities, the loneliness is not happy and afraid. But all the time, and they spent it in vain.